The ‘4 Models’ of public relations practice: How far have you evolved?

While preparing to teach my first PR class back in ’85, I happened upon “Managing Public Relations,” by Jim Grunig and Todd Hunt. Though I lost track of my copy long ago (never loan textbooks to students — never), one element of that book influenced how I taught and practiced PR for the past 23 years.

For me, the 4 Models became more than a teaching tool. When Grunig & Hunt published their theory, I was a full-time PR practitioner working for marketers who saw PR as promotion and publicity, period, and with no ethics component. The 4 Models helped me see the potential of public relations and, in part, inspired me to open my own shop so I could get beyond marketing and do some serious PR.

Here’s a summary of the models. If you’re like most of us, you’ve spent a little time in each of them.

The Press Agentry Model. With roots in the 19th century, press agents worked to influence public opinion by creating news. P. T. Barnum was a master of the art form, weaving fantasy and half-truths

into his messages. Press agents were liars — at least some of the time — but it got their clients into the headlines, and that’s what mattered. Press agentry is alive and well in the entertainment business to this day. I mean, how else do you explain Paris Hilton?

The press agent invests no time in research and even less in the discussion of ethics. The aim is behavior manipulation.

It’s curious, though not surprising, that Seth Godin used a form of press agentry to position his book, “All Marketers are Liars,” At least he admits it from Chapter One, so don’t be too hard on the guy. You probably bought his book. I did. 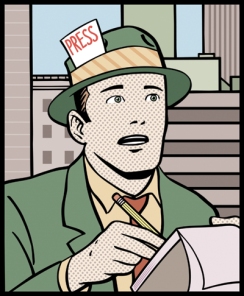 truth and accuracy in communication, but they did little more than distribute information. Acting in the role of “journalist in residence,” a PR person under the public information model used no formal research to guide his work. But the move away from pseudo events and half-truths was a significant shift toward more ethical practices.

One-way communication is the focus of the public information model. Press releases, brochures, even static Web content, are tools used by these information dispensers. They tell the story and hope someone is paying attention. I see a lot of this model in higher education, including at my own university. Government PR folks also do a lot of one-way storytelling to “get the word out.”

The 2-way asymmetrical model. The post World War II rise in consumer products created a need for targeted, scientific marketing. PR played a role. Under the 2-way asymmetrical model, practitioners used research to get inside the heads of consumers and to help fashion the sell messages. Grunig and Hunt called it “scientific persuasion,” and it remains the stock-in-trade of advertisers everywhere.

While asymmetrical communication is two way, the goal is anything but balanced. It’s all about persuasion to trigger a transaction, thus its popularity with marketers.

The 2-way symmetrical model. A handy website at the U of Florida describes it this way:

Uses communication to negotiate with publics, resolve conflict, and promote mutual understanding and respect between the organization and its public(s).

The 2-way symmetrical model casts public relations in the role of mediator versus persuader. Under that model, PR pros listen to the concerns of both clients and key publics and help them adapt to one another. A utopian model? It seems so, since the PR professional must represent the interests of ALL parties while being paid by only one. It works well with enlightened management who take a long-term view, but they’re rare birds these days.

Can we realistically serve multiple stakeholders whose needs conflict? For example, can we represent the interests of loyal employee groups while our shareholders demand layoffs in favor of low-cost offshore suppliers?

If you view yourself as a client advocate, the 2-way symmetrical model may seem nonsensical, and that’s too bad. To be successful in business — one of my old bosses used to say — ALL parties must benefit — not just customers and investors.

I’m old enough to remember when the C-suite mantra was something other than “maximize shareholder value.” Not that long ago, business leaders actually worried about the long-term impact of their decisions. They planned for sustainability before it became a buzz word for the green movement. Some even showed a sense of ethics and social responsibility — a desire to act in the public interest although it cut into dividends or executive bonuses.

Today’s amoral, profit-lusting business environment doesn’t leave much room for the 2-way symmetrical model, which, by definition, may not be self-centered. Makes it hard to justify shareholder greed and 7-figure bonuses when you have to worry about fairness, balance and the whole “relationship” thing.

Can public relations move American business toward a more balanced business model and a more ethical one? Maybe not. But someone has to try.

Special thanks to Judy Gombita for linking me to Henry Mintzberg’s paper (pdf), “Beyond Selfishness.” It reminded me why the 2-way symmetrical model should be more than a theoretical ideal. It should be standard business practice.

This entry was posted on Sunday, August 10th, 2008 at 9:19 pm and is filed under Kent State, Marketing, PR, PR Education, Public Relations, Public Relations Ethics. You can follow any responses to this entry through the RSS 2.0 feed. Both comments and pings are currently closed.

39 Responses to The ‘4 Models’ of public relations practice: How far have you evolved?